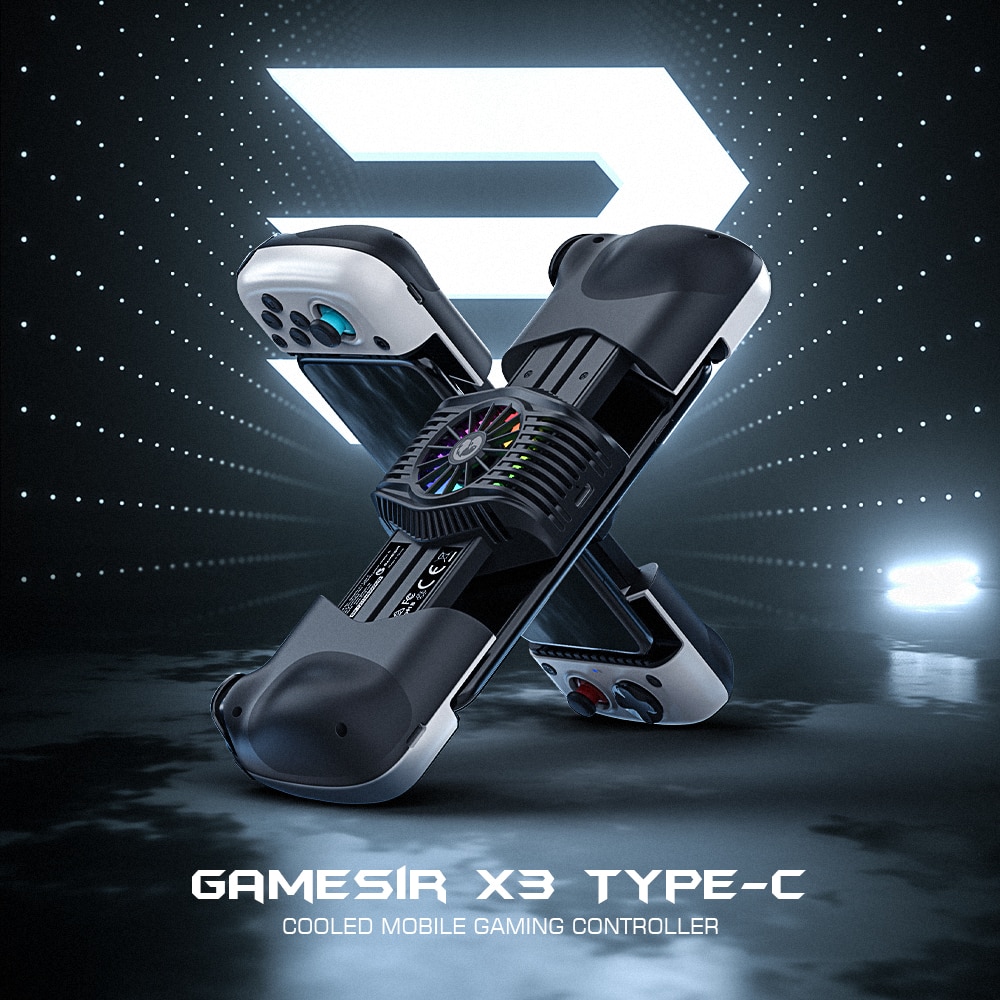 With the advent of mobile gaming and cloud gaming, many gamers are looking for more convenient mobile accessories for a professional-grade mobile gaming experience, whether it’s a physical controller or a phone cooler. However, gamers always have to compromise after suffering from decision phobia due to the smaller ergonomic space with a smartphone. Fortunately, GameSir has found a win-win solution – hybrid. This is where the X3 Type-C gamepad was born.

As a 2-in-1 game controller and phone cooler, GameSir X3 Type-C gamepad provides a game console like experience while solving the problem of phone overheating. With a 4000mm⊃2; cooling area and a 7-blade fan that provides excellent airflow, it can effectively cool your mobile phone. Designed for pro-level gaming, bumpers, triggers, ABXY buttons and D-pads feature Kailh switches, ensuring clear tactile feedback that you might forget it’s playing on your cellphone, while Alps analog joysticks enable smooth and precise 360° control. What’s more, there are more ways to customize it to your controller with a variety of replaceable parts like D-pads, thumbsticks, and thumbstick caps. Gaming is Winning.™ If you don’t want to compromise, try GameSir X3 Type-C and let it take you into the next-gen mobile gaming ecosystem. 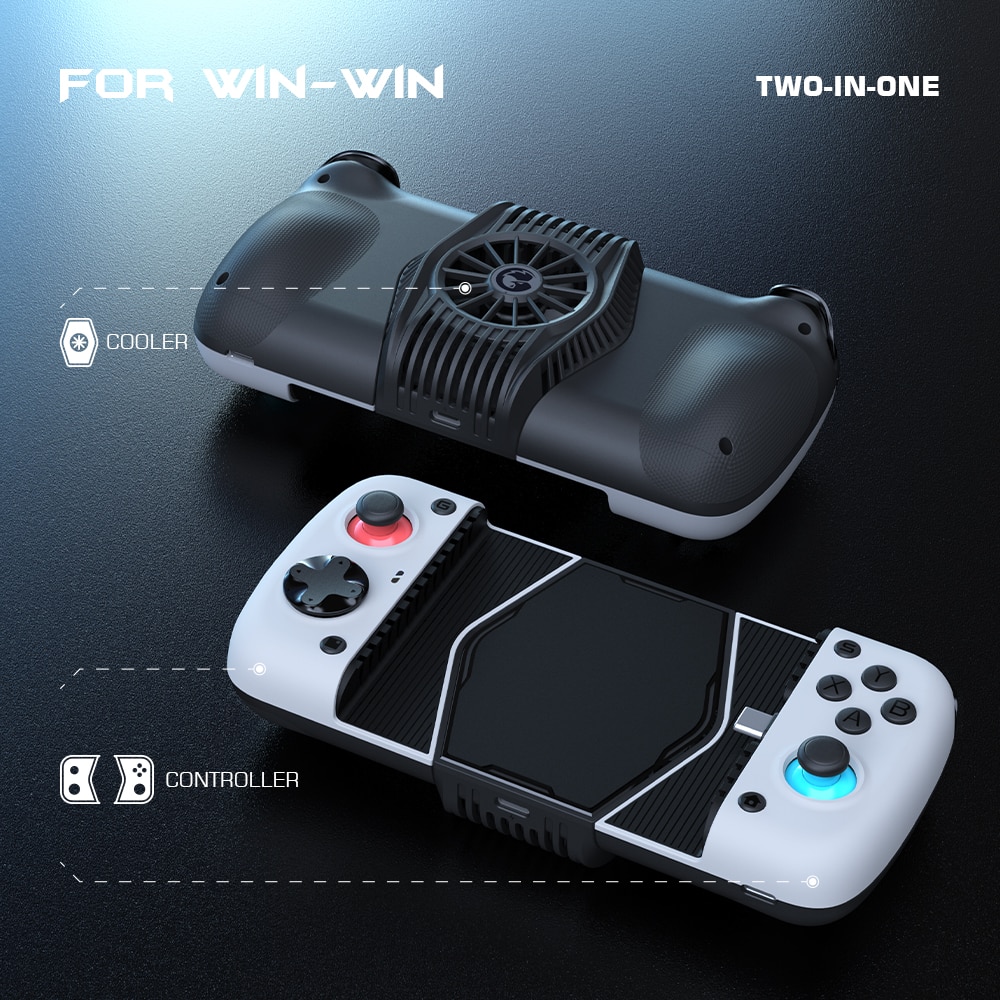 Gamepad and phone cooler in one

Choosing a game controller or cooler for mobile gaming? This has been a perennial problem due to the less ergonomic space available for phones. Because of the choice between the two, mobile gamers are often hesitant to choose gaming peripherals. However, as a gamepad and cooler, GameSir X3 Type-C game controller simultaneously provides a console-style gaming experience and prevents your phone from thermal throttling and lag when playing GPU-demanding games like Fortnite. It’s no longer a painful predicament, just one device, getting both a controller and a cooler. 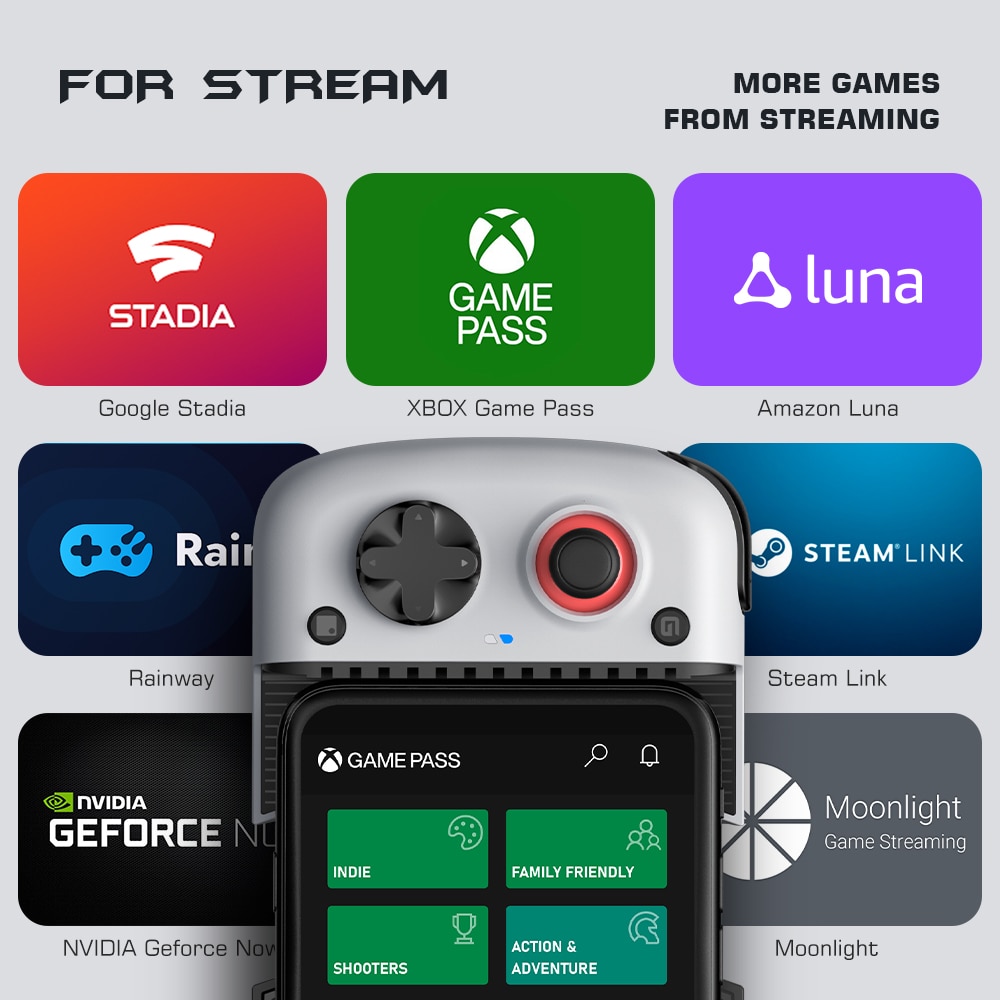 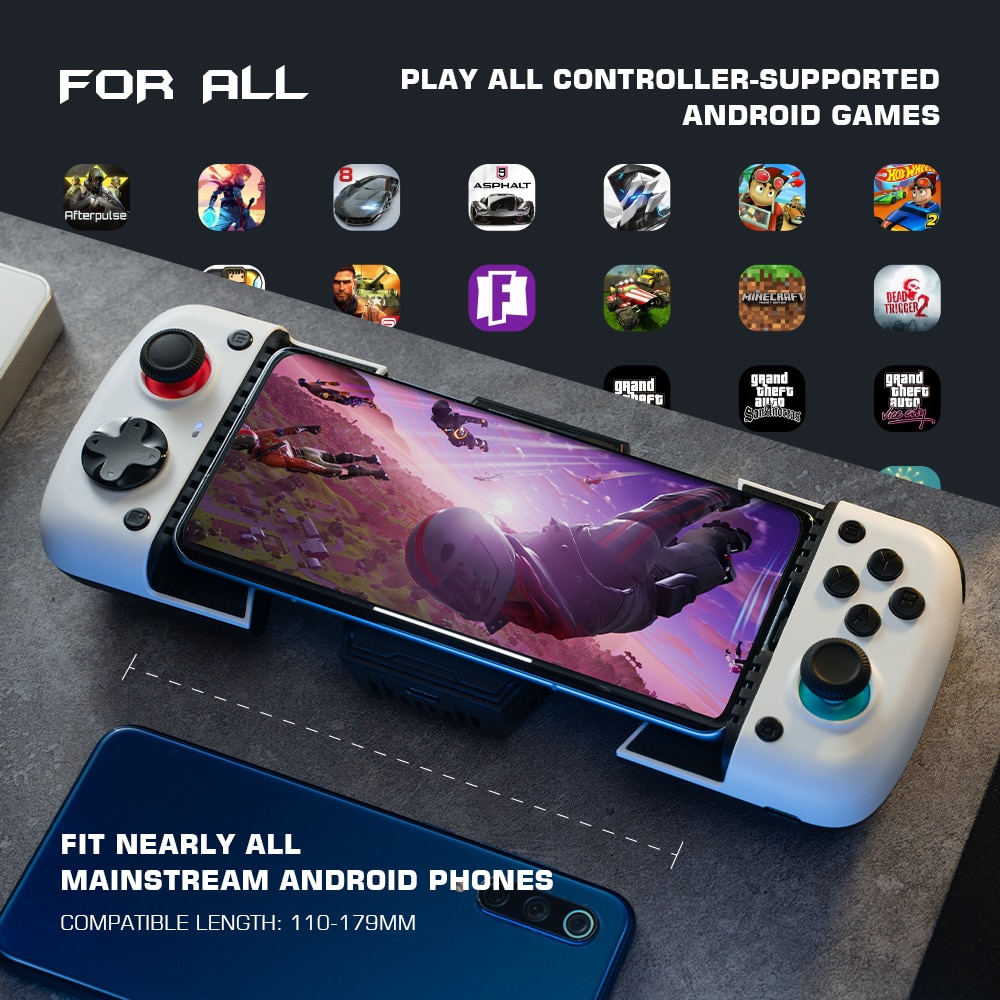 Following the stretched design of the popular X2 series, GameSir X3 Type-C mobile gaming controller is also flexible and fits most Android phones with a length of 110-179mm. It is compatible with all Google Play games that support controller, giving gamers the same gaming experience as a standard game controller. Plug your phone into GameSir X3 Type-C and directly play all controller-supported games from Fortnite to Minecraft without having to put up with clunky touchscreen controls. 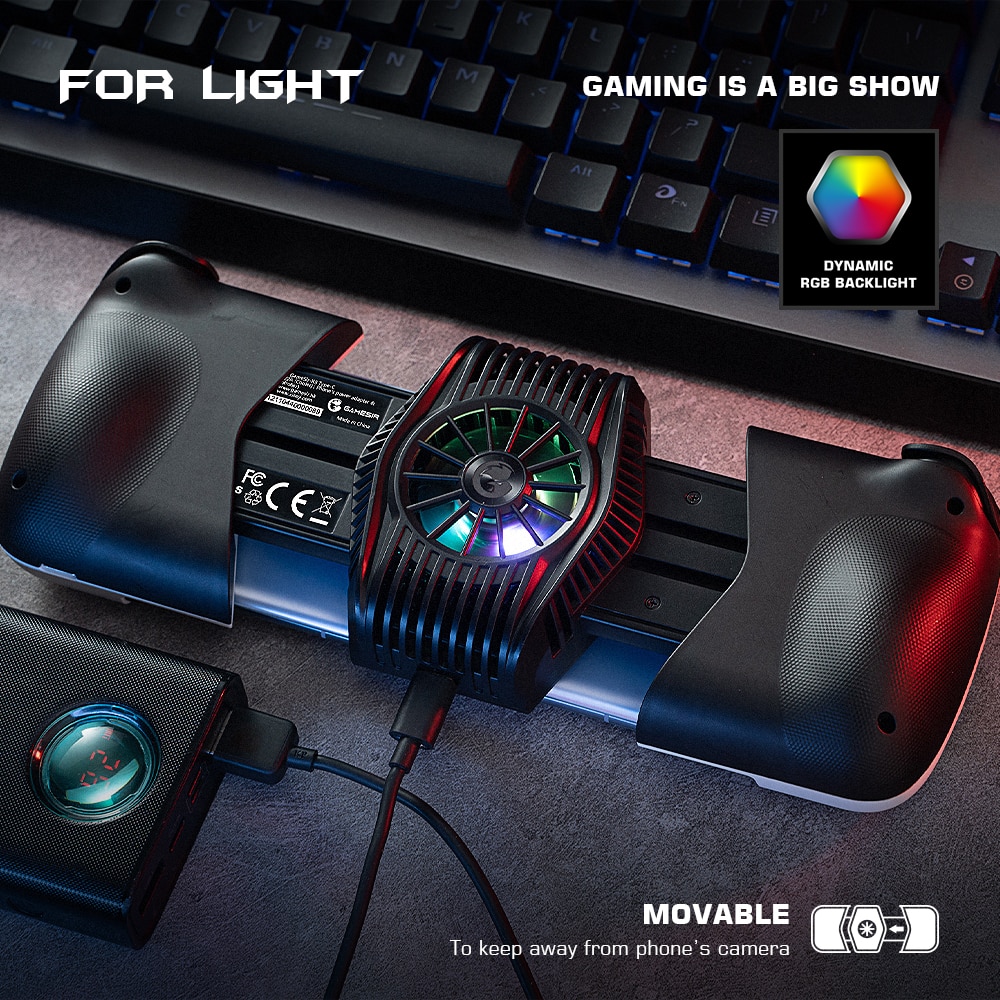 Gaming is a big show. Once the cooler is plugged into power bank via a USB cable, the cooling fan on the back work in sync with the dynamic RGB backlighting, just like an RGB gaming monitor. What’s especially surprising is that the cooling fan can be moved to avoid the phone’s rear camera. Therefore, GameSir X3 mobile controller is not only ingeniously designed, but also dazzling and beautiful. 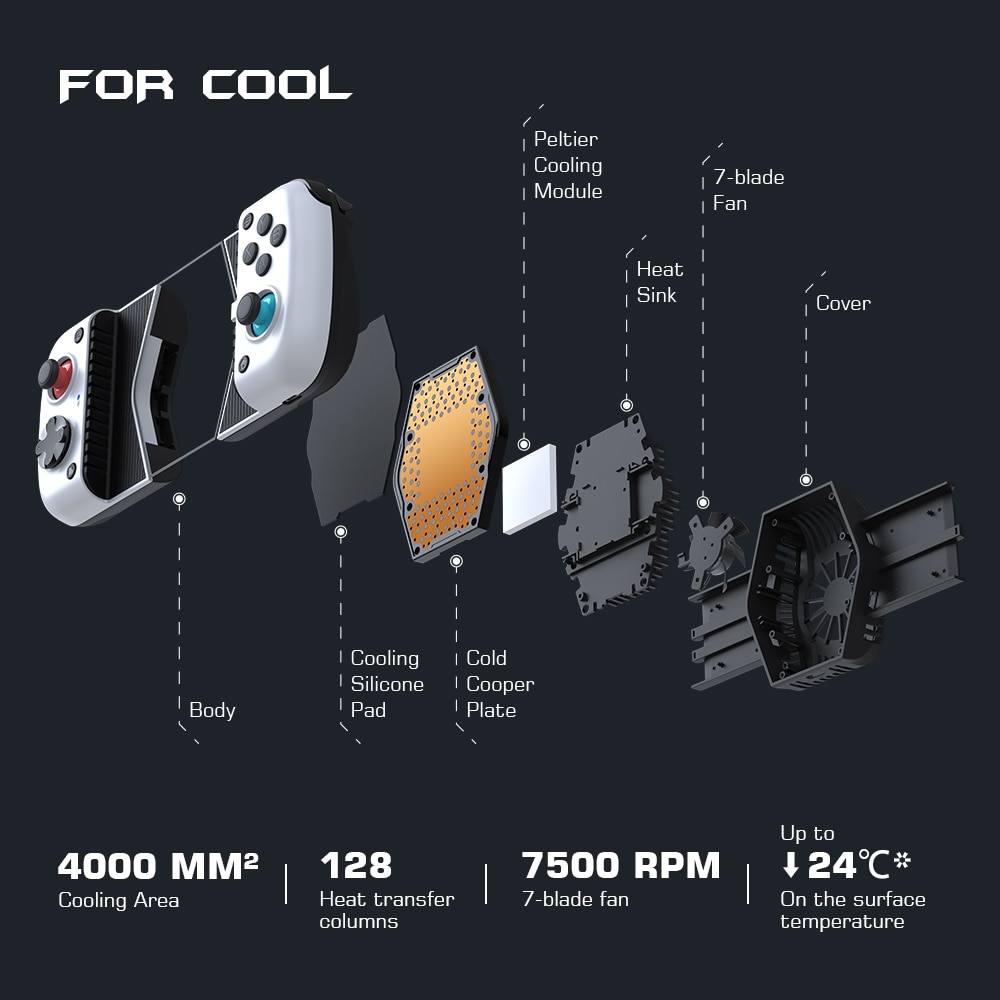 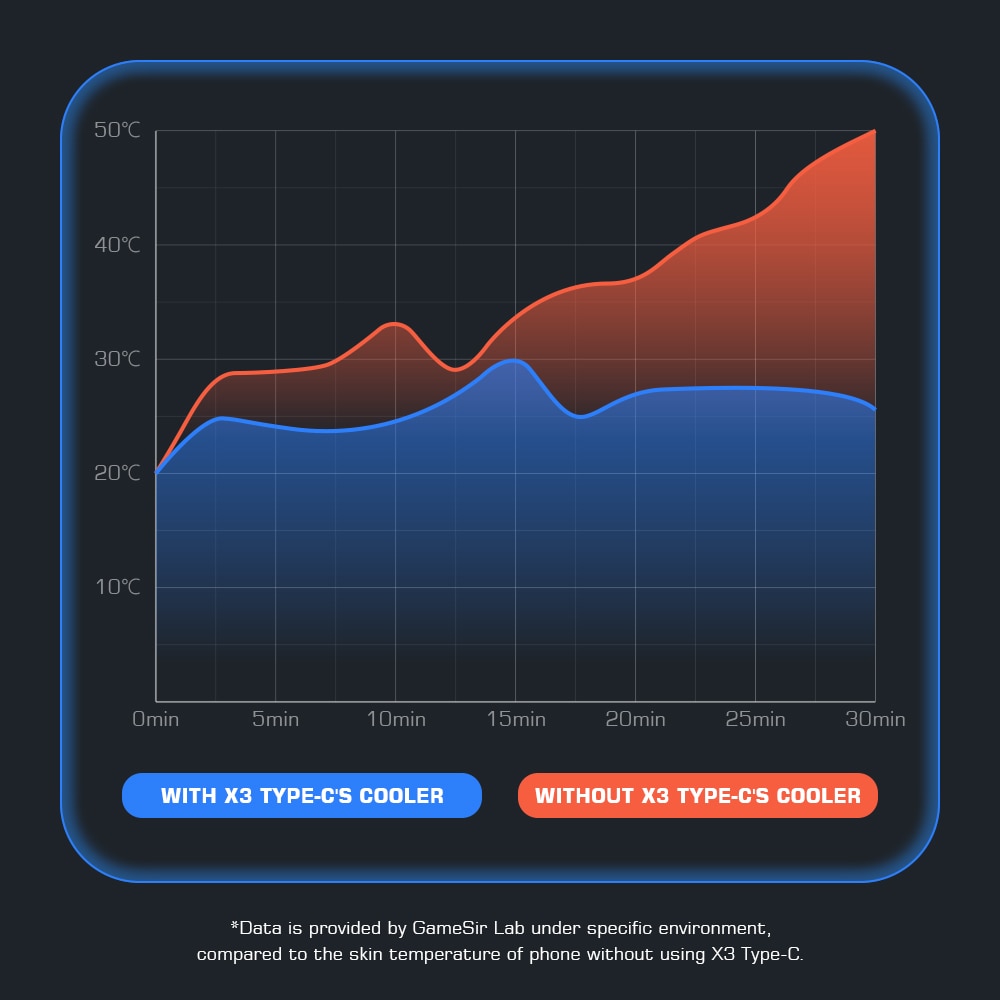 Phone surface can be cooled by up to 24°C

Based on the Peltier cooling effect, GameSir X3 mobile gamepad comes with a 4000mm⊃2; cooling area on the front, providing a large area of ultra-fast heat dissipation. 128 heat transfer columns help quickly absorb heat from the Peltier modules, while a 7-blade fan spins at 7500RPM for excellent airflow. With this powerful engineering system, GameSir X3 can even lower the phone’s skin temperature by 24°C. The fan also has a noise reduction design, and the noise is only 32dB when working.

Please note: GameSir Lab conducts product testing at 25°C room temperature, comparing skin surface temperatures on phones with and without the X3. The cooling effect of the X3 will vary depending on the usage environment. The test results are for reference only, not the absolute value of heat dissipation. 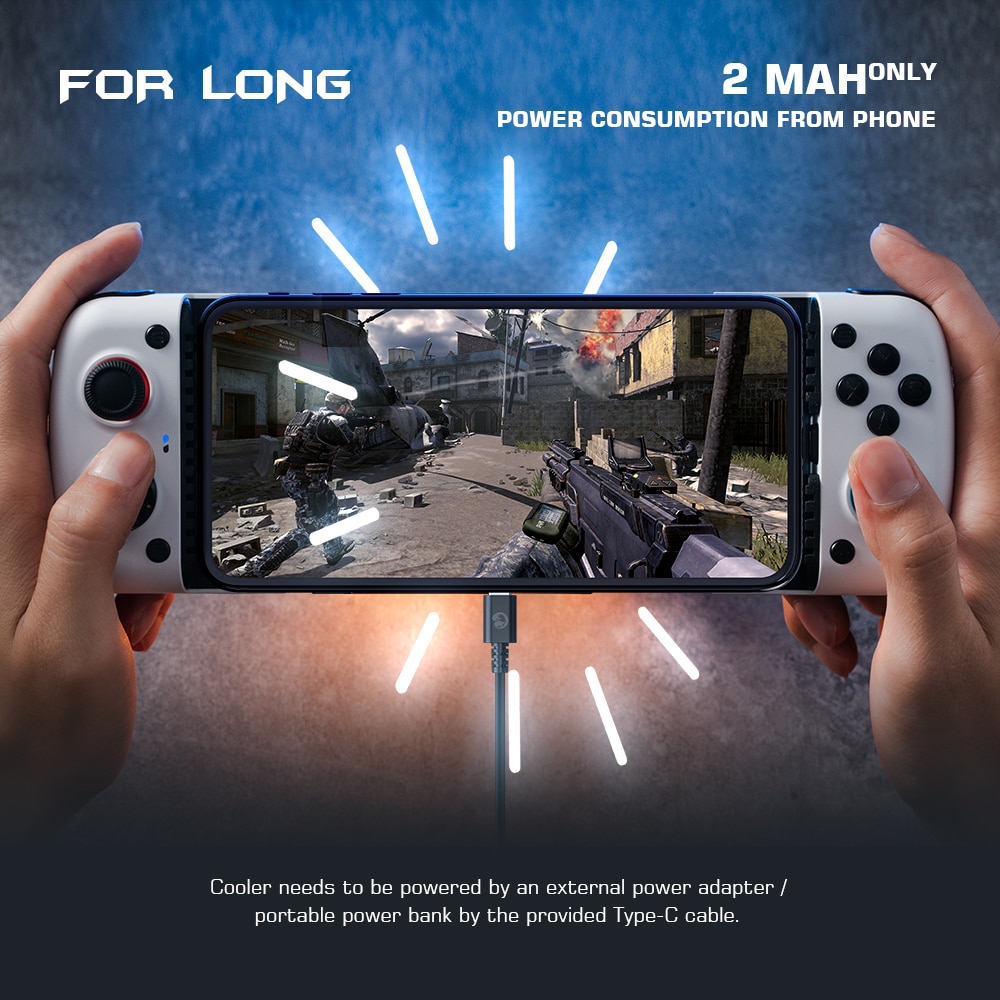 With no built-in battery design and weighing only 270 g (0.6 lbs), it’s more eco-friendly and travel-friendly for on-the-go gaming. Despite no battery and powered by your phone, X3 Type-C has ultra-low power consumption at 2mAh only for long-time gaming. Calculated by a mobile phone battery of 3000 mAh, X3 Type-C consumes only six ten-thousandths of its power per hour. Meanwhile, the cooler is powered by an external power source, without consuming your phone’s battery. 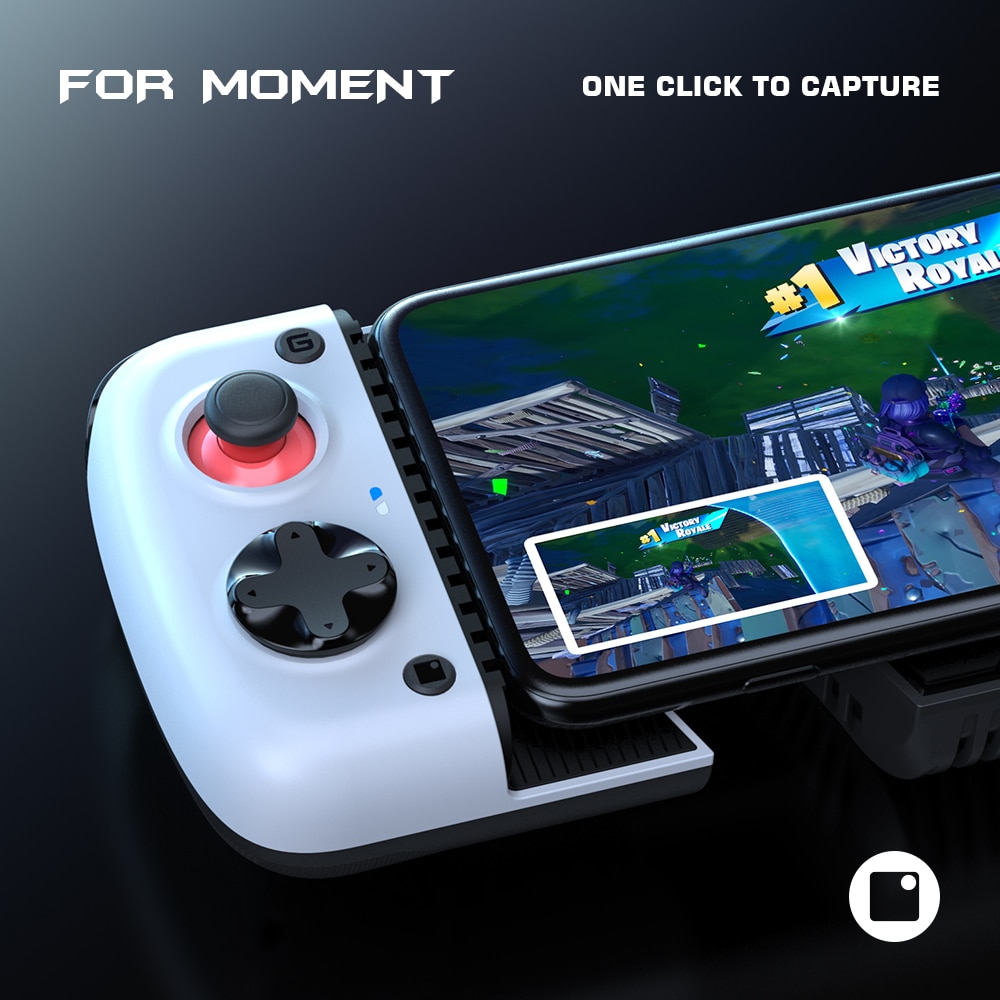 Memories always get us grow up, be they delightful or disappointing. X3 Type-C’s one-click capture allows you to capture any awesome or muffed moment for later retrospective. 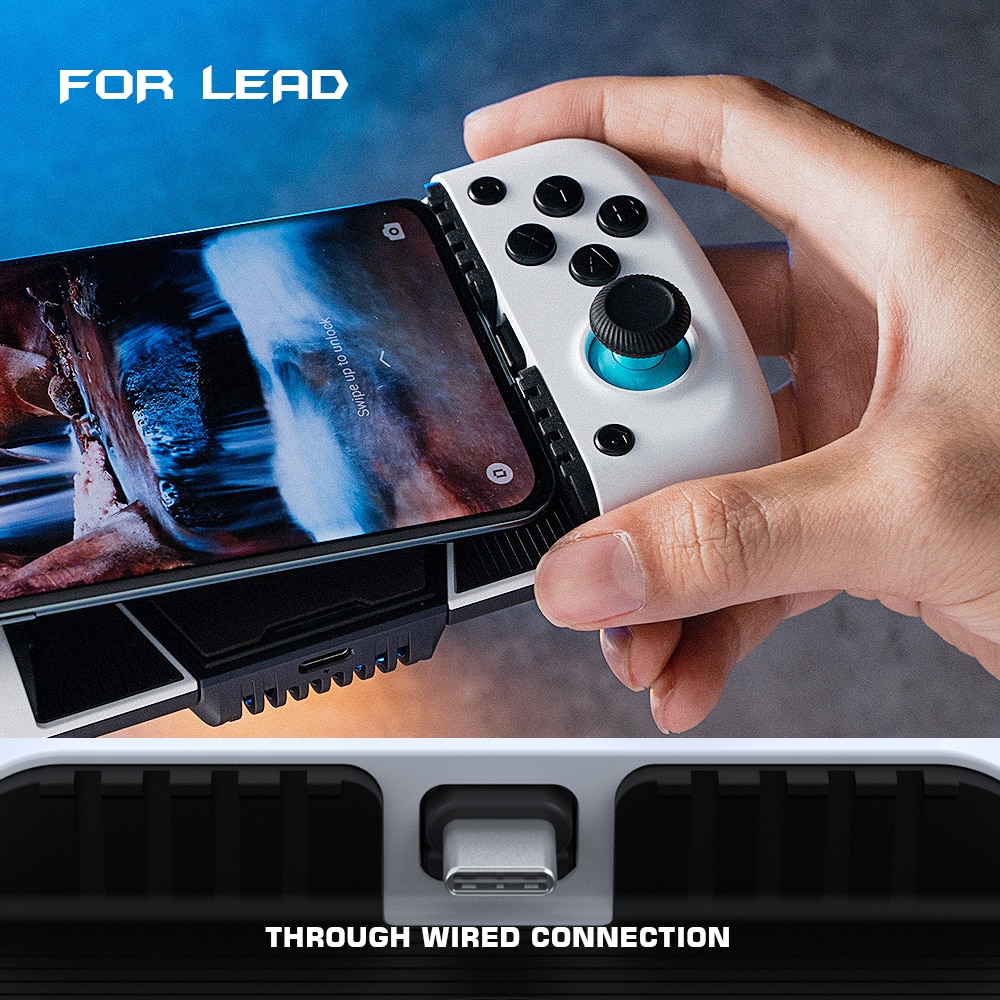 X3 Type-C directly connects to your Android phone through the Type-C port, allowing extra fast response of your on-screen character once buttons are pressed. Because of no wireless signal delay, it helps you keep any possible edge over the competition. 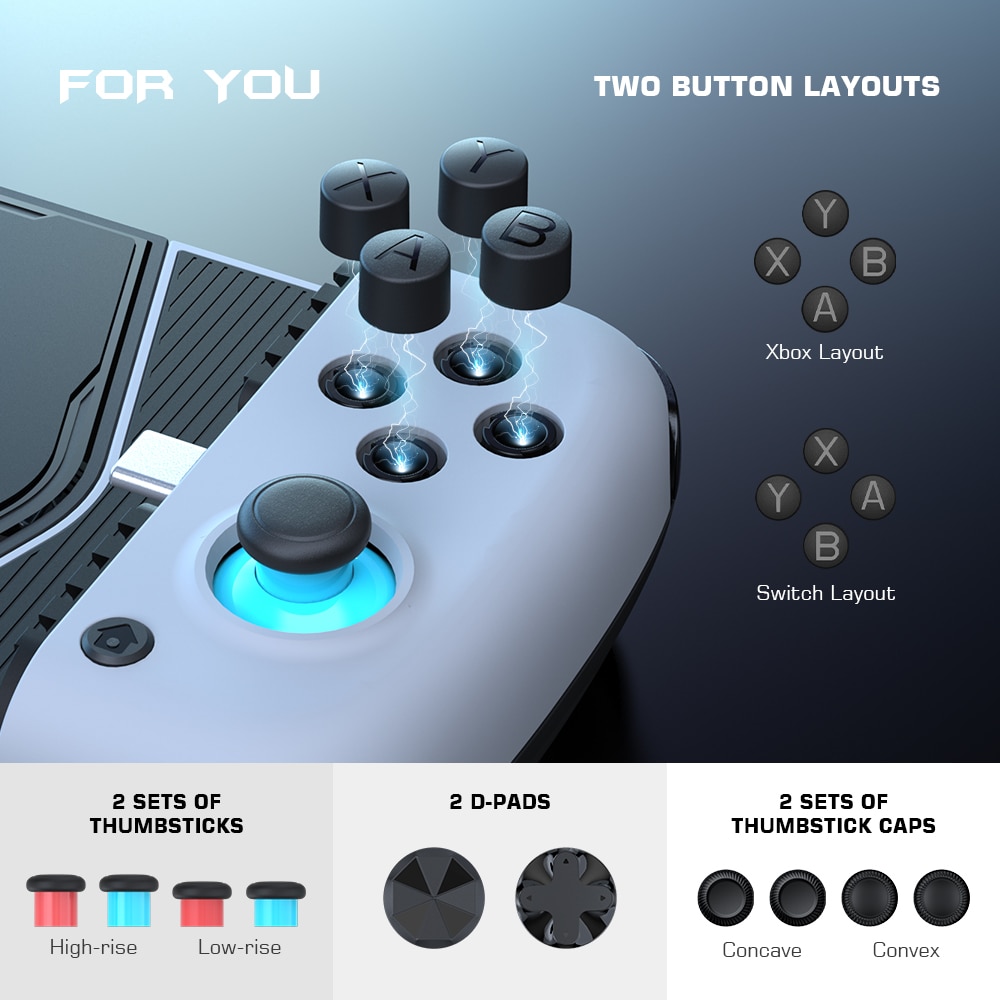 Customize and command in your way. X3 Type-C features unlimited customization with many interchangeable parts from ABXY buttons to D-pad and thumbstick to thumbstick cap. Therefore, different gamers can tailor it to their own playstyle in different games and play at their best. Use X3 Type-C and build your own controller now.

A. 2 ABXY layouts: Console battle never ends. Some gamers stick to the traditional, classic home-based gaming consoles as Xbox and PlayStation while others’ 1st console directly go for the more innovative Switch console, for both on-the-go and home gaming. In this case, for satisfying different gamers’ control habits, we specifically used magnetic and detachable design on ABXY buttons so that gamers can swap the layout between the standard Xbox ABXY layout and Switch ABXY layout, with just a simple pull.

C. 2 D-pads: X3 Type-C’s directional pad is available in 2 shapes, Standard and Faceted. Easy to swap any time and customize to your playstyle.

*When replacing D-pad & thumbsticks, you need to press them for fixation after aligning the slot. 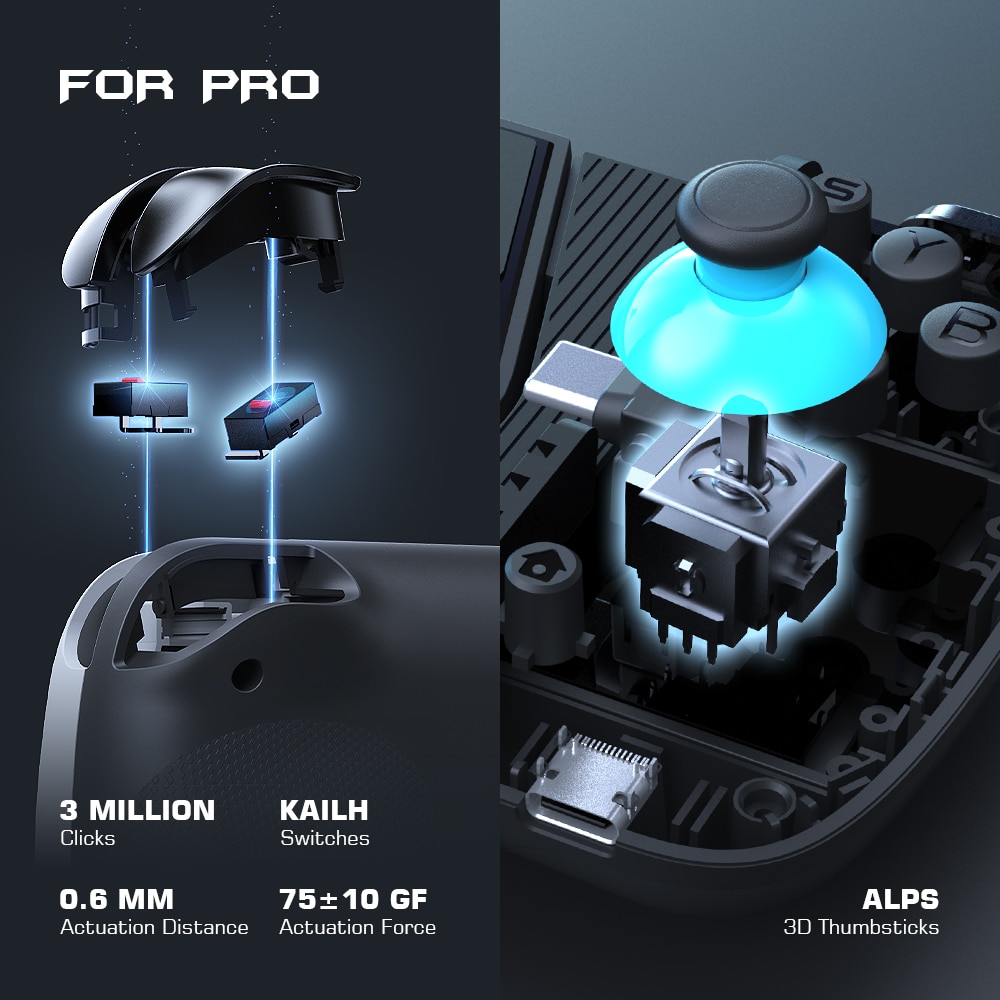 A. Kailh switches, up to 3 million clicks: ABXY buttons, bumpers, triggers & D-pad all come with Kailh switches. With a reduced actuation distance of 0.6 mm only, around 40% less than the normal membrane controller, the buttons can be clicked, then triggered instantly so that you can achieve fast response and agile movement as a pro. Besides, the crisp tactile feedback enables you to forget that it’s playing on the phone, just like mouse clicking. 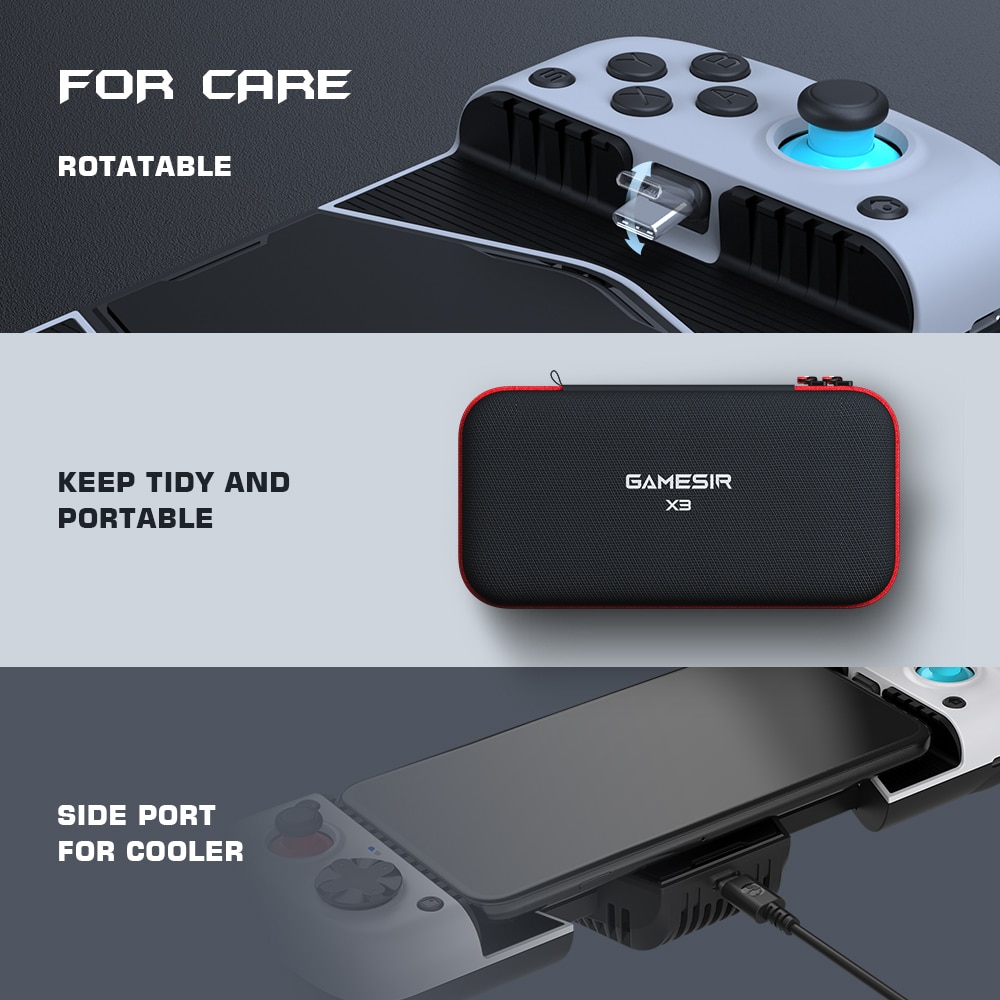 B. With Carry case: Care for storage & protection. Come with a compact yet elegant carry case so that you can organize all its accessories in one case, no matter as a home decoration while home gaming or a protective storage case while on-the-go gaming.

C. Side-mounted port for cooler: Care for your hands. The cooler’s Type-C port is side-mounted so the power cable of cooler won’t get in your way of gaming. 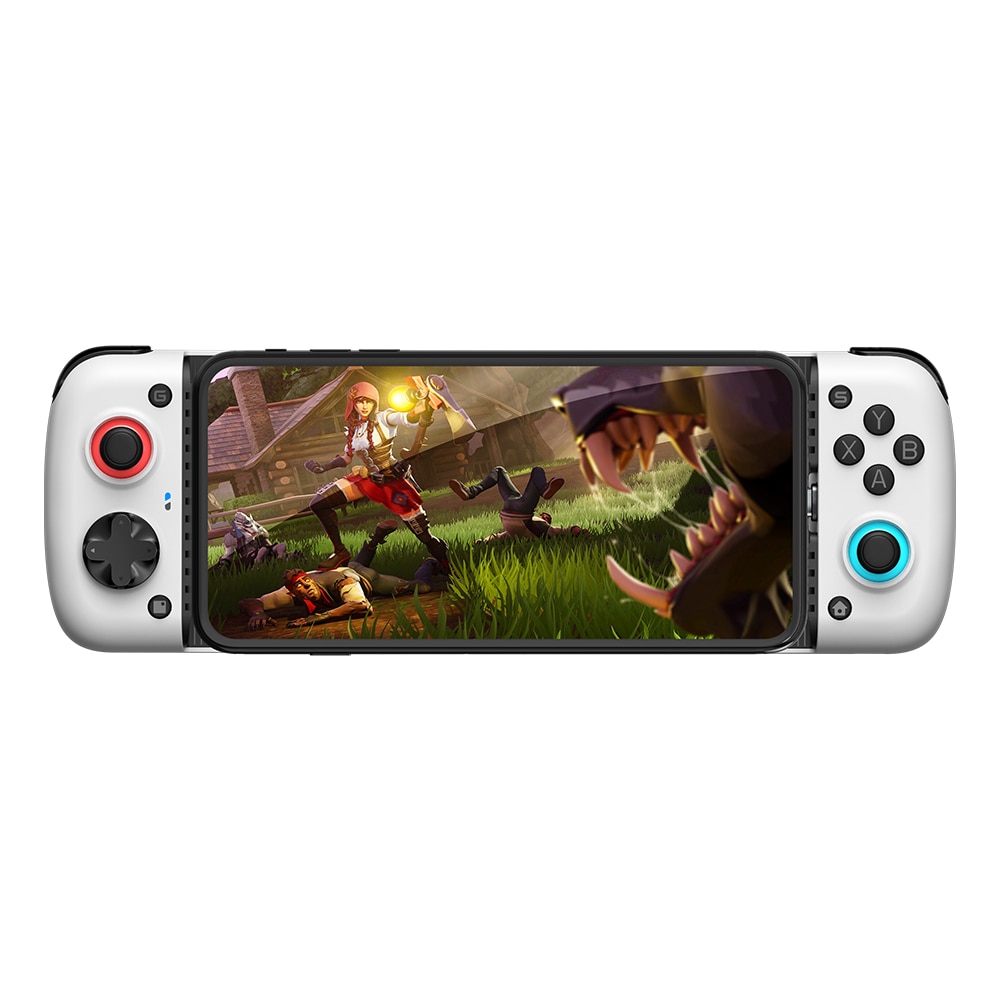 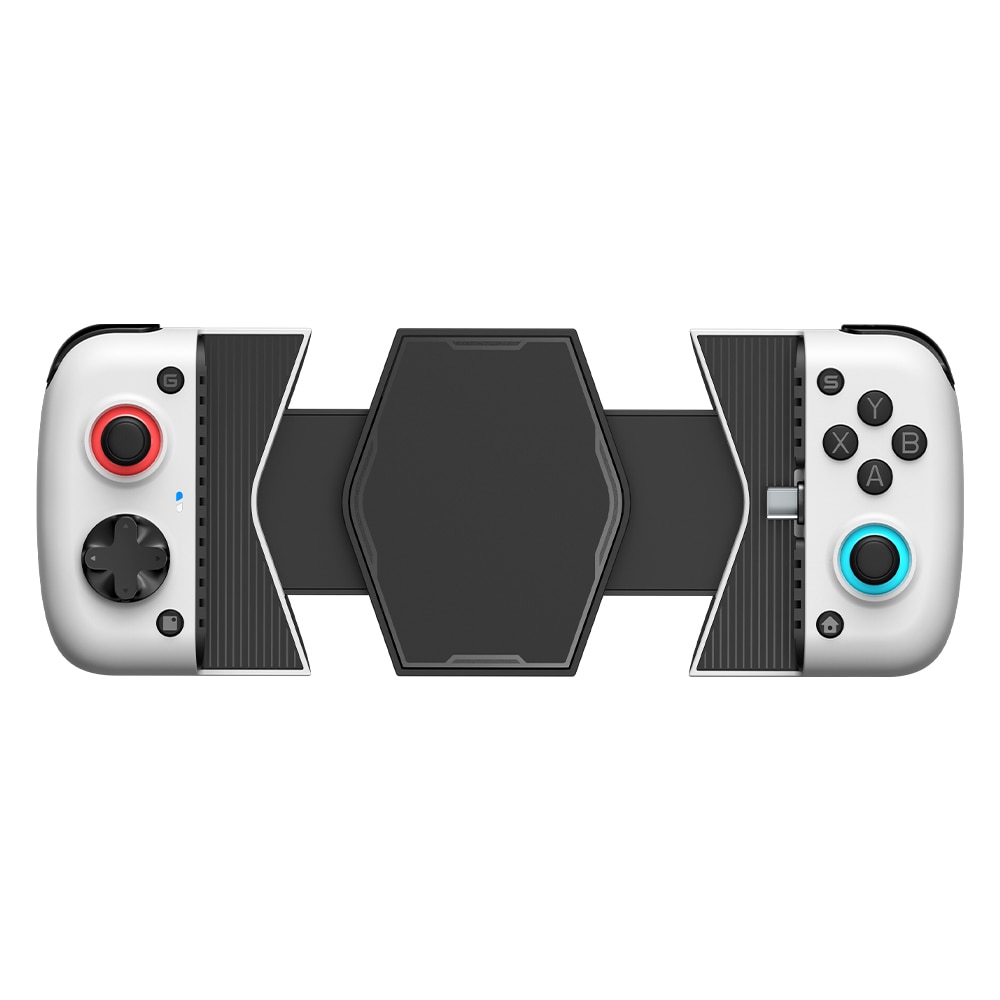 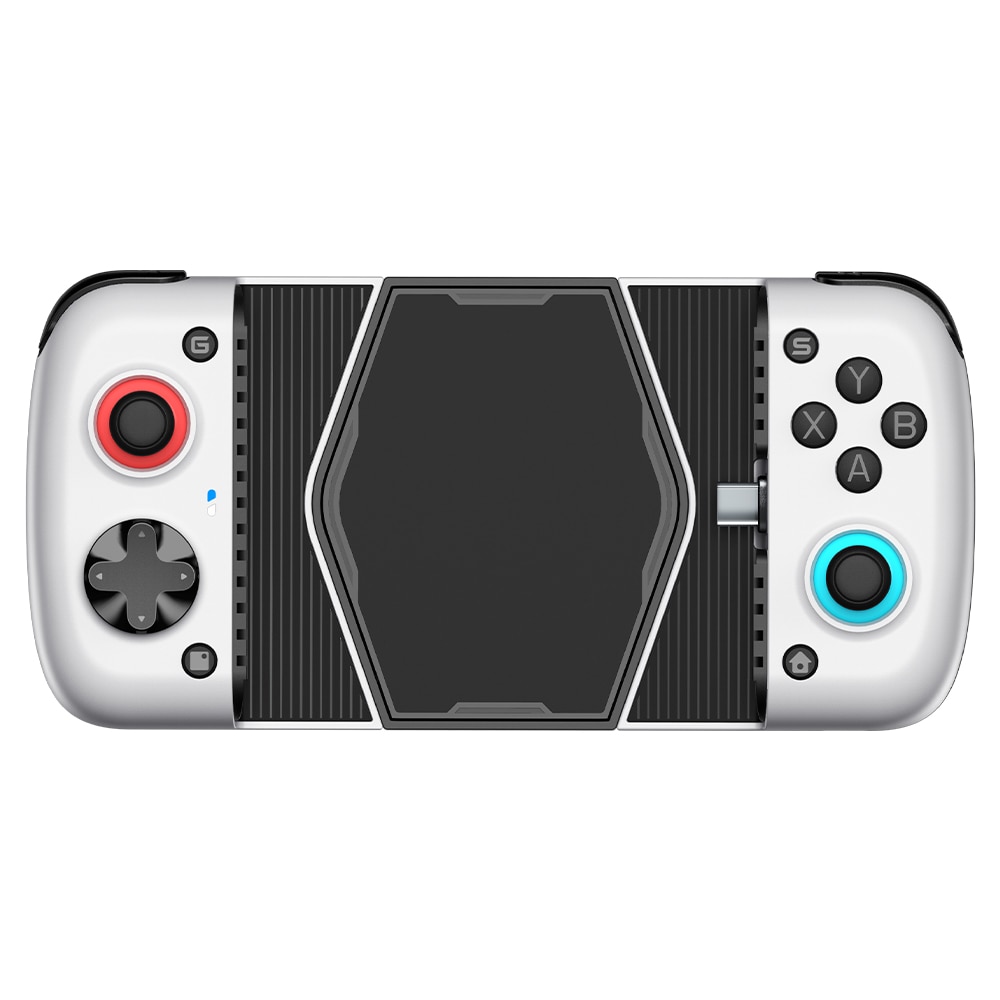 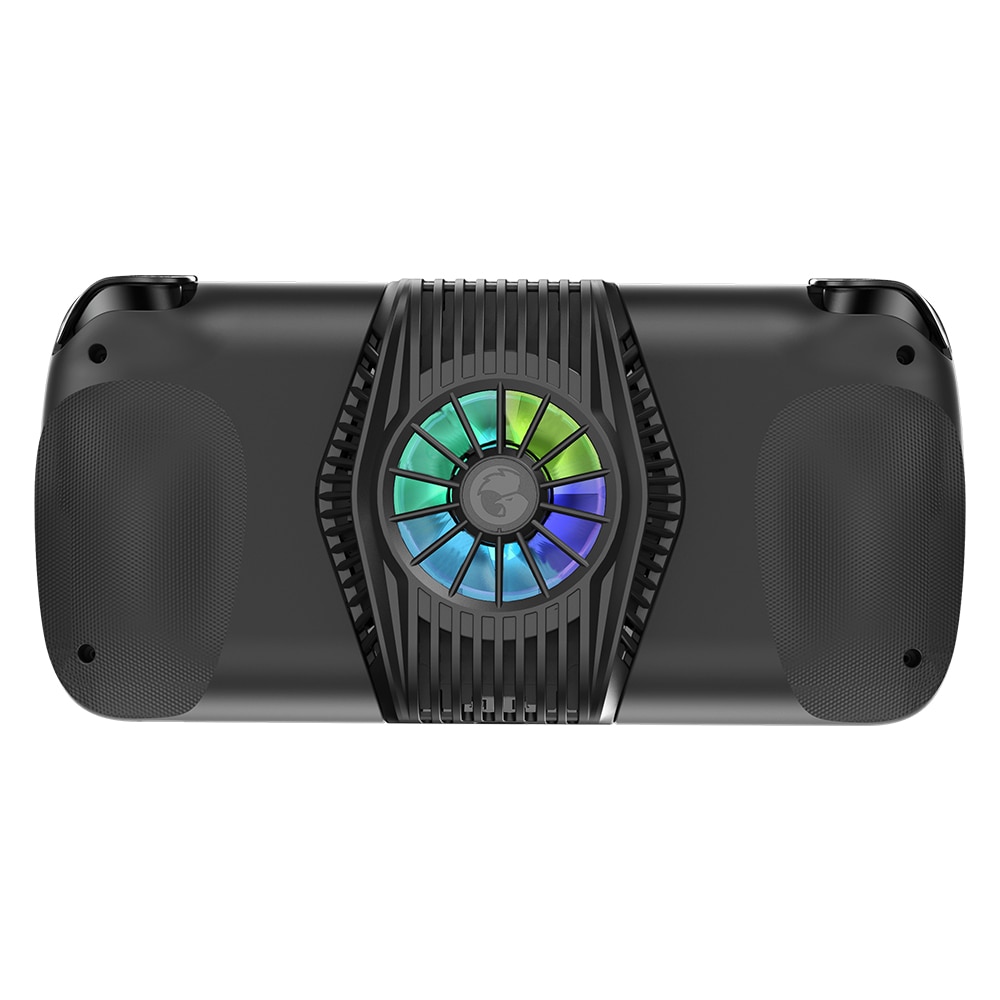 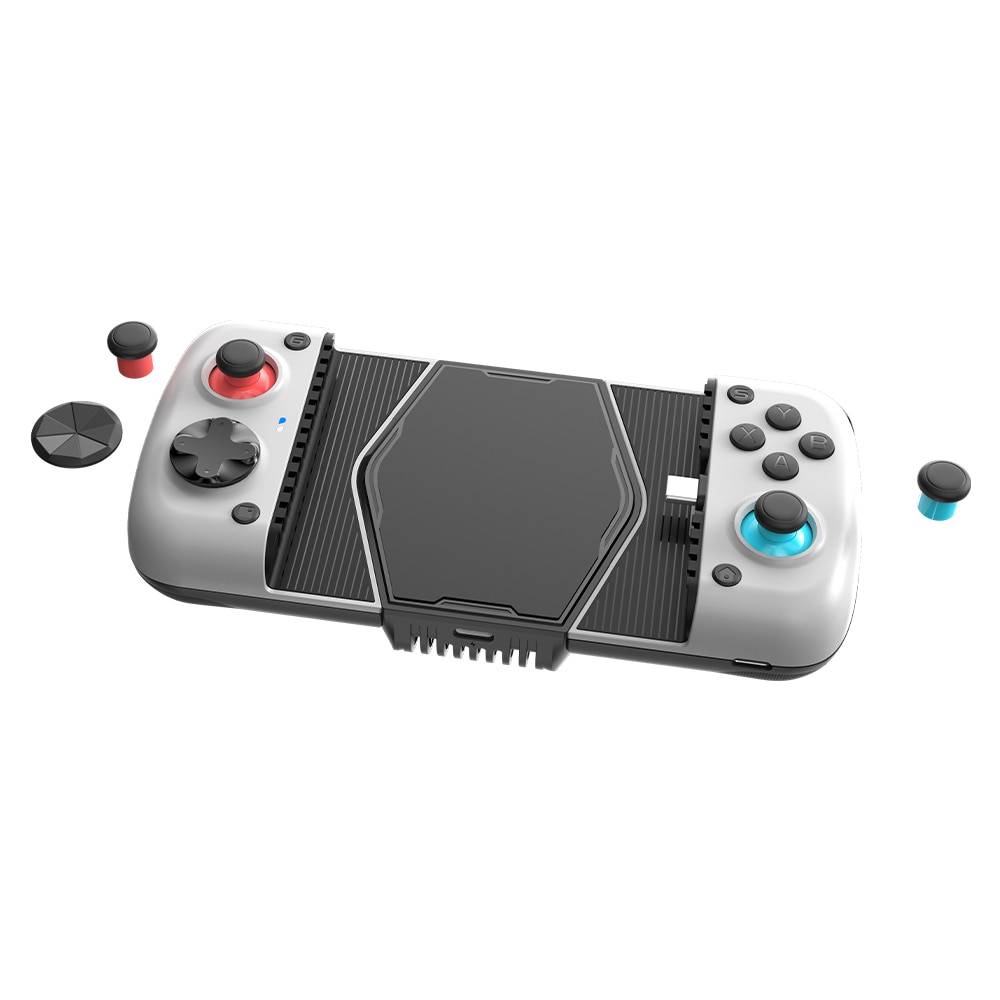 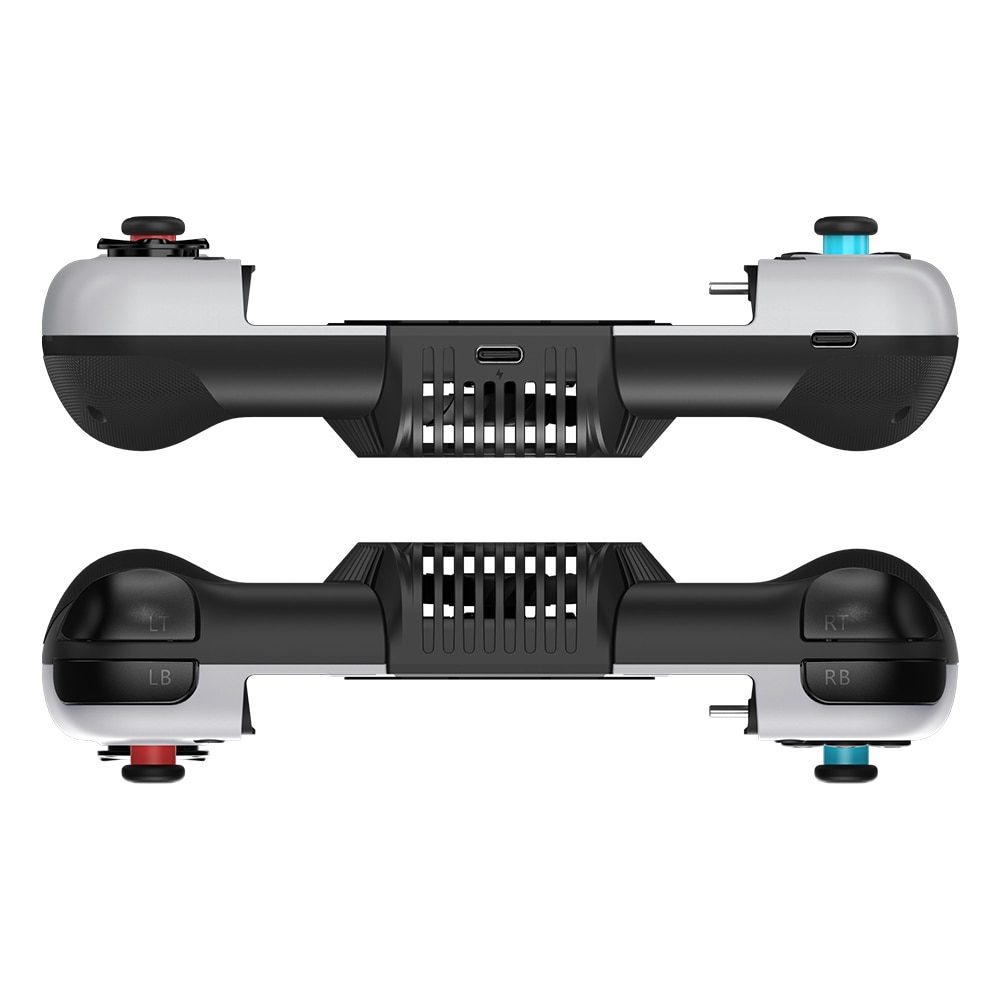 Note: Please remove the phone case before use. 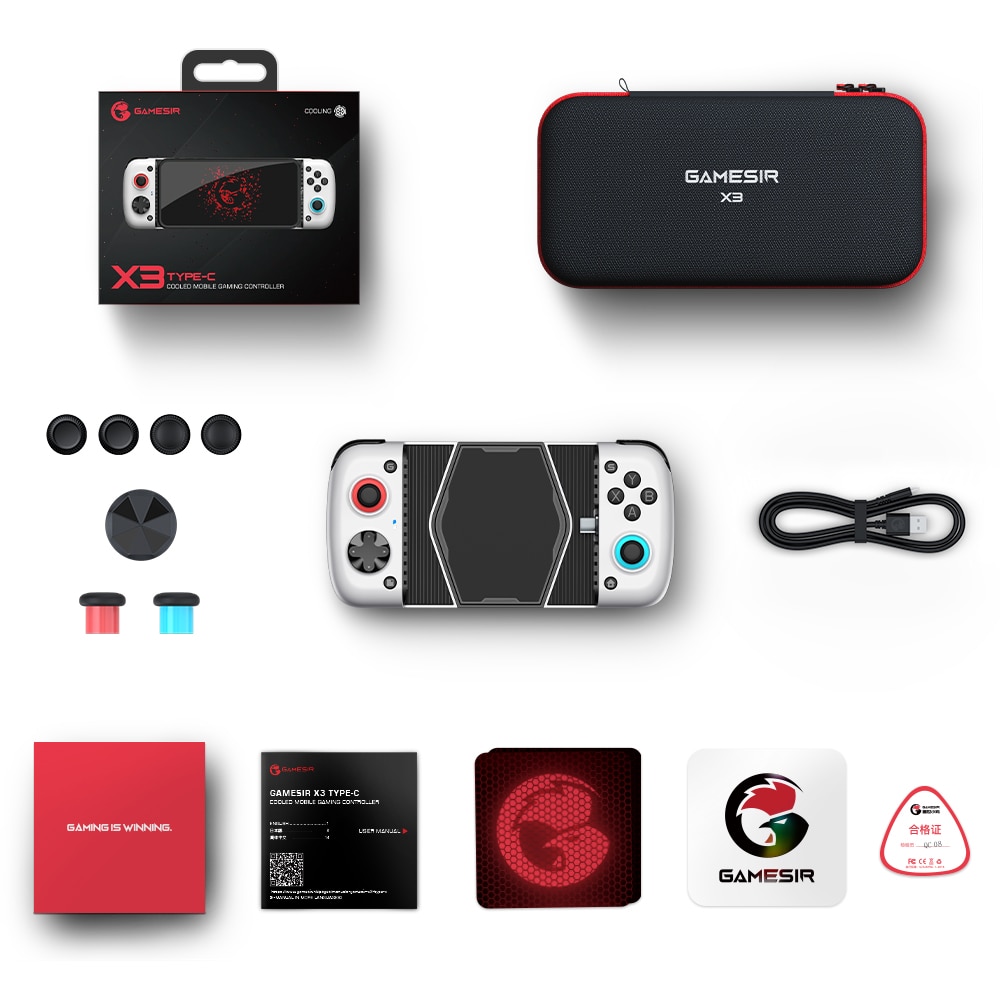